Saint Helena Corporations PLC (SHCPLC) and St Helena Leisure Corporation Limited (SHELCO), are  pleased to announce the acquisition of a controlling stake in SHELCO by SHCPLC.

Consideration:  GBP1,000,000 settled in cash, with a total project value of >GBP150m over the next five to seven years

SHELCO’s only asset is an option to acquire approximately 400 acres (162 hectares) of land on the tropical island of St Helena. The 162 hectare site has been granted planning permission for a world-class 6,378 yards 71 par golf estate designed by renowned golf course designers Mackenzie & Ebert. Mackenzie & Ebert have designed well known courses in Europe, Middle East, Asia, North America including the Bahamas. The architect for the resort and residential development is well-known London firm, Purcell whose UK partner Jeremy Blake said “having had several meetings with Paul O’Sullivan of SHCPLC, it is clear that he shares our vision and wants to make this project happen as soon as possible. He’s made it clear that he will keep all the professional consultants on to make sure he does not lose any institutional knowledge.”

Outgoing Chairman of SHELCO, Sir Nigel Thompson said “We are delighted to have been able to tie up this deal. Paul O’Sullivan has a long career in property development around the world. Being a British national and having previously served the Crown as a young man, he is ideally placed to take on the task of finishing what we have started. I am particularly pleased that having analysed SHELCO’s development strategy for delivering Broad Bottom Estate as part of St. Helena’s overall plans for creating a self sustaining, environmentally friendly economy, Paul O’Sullivan is completely in accord with our development proposals and has agreed to exercise the Option before the end of 2020. Paul O’Sullivan has a long and distinguished presence in property development, some of it high-risk, and has proven his mettle in that arena. Apart from his development skills, I admire his obvious determination and staying power which will be required to complete this significant challenge. Although we have relinquished control of our company, the existing shareholders of SHELCO have acquired through the process a minority interest as we all share the aspiration to see St. Helena succeed .”

He further said: “When SHELCO tied up the original option agreement just after the turn of the century, they didn’t realise they had embarked on a two decade endeavour to help create a sustainable economy for St. Helena to introduce high value, low volume tourism to St Helena Island which would protect its environment whilst bringing real economic benefits to the Saints.”

New Chairman of SHELCO and currently the CEO and shareholder of SHCPLC Paul O’Sullivan said “This deal brings us a step further to realising our goal of being the principal catalyst to create a sustainable economy for St. Helena on their picturesque island. We are already the single largest non-government investor on the island and this will place us in a position to develop an eco-resort with a world class golf course, which will not be matched anywhere. Having paid the GBP1m to acquire SHELCO, we have also provided for the GBP2.3m required to exercise the option before the end of 2020, with a view to starting work on site and completing the development, within a further five years. I already have keen interest being shown by two well-known 5 star hotel brands, subject to resolving the direct air access from Europe. ”

O’Sullivan went on to say; “There has been a lot of negativity surrounding the opening of the airport, which was claimed by some to be a complete failure in the first instance. However the St Helena Government and DFID agencies persevered and what we have today is an airport capable of meeting the tourism needs of the island well into the future. I am confident in our investment and expect to see profits flowing in about 5 years’ time. I am also confident in the Government and people of St Helena and hope they will see this as a further demonstration of our belief in them. Whilst everyone was turning their backs on the island, we were buying land and signing construction contracts. Although we are also pursuing other opportunities on the island, we intend to make this eco-resort with its world class 18-hole golf course our priority. We have already built a luxury three bedroom villa, as a show-house, to demonstrate what we are capable of and this will benchmark our quality standards for future buyers.”

The Island of St Helena is one of the most remote islands in the world, with a rich British colonial history and about 4,500 inhabitants. Travel to the island for the last three centuries has only been by ship. In the 21st century, travel has been by the Royal Mail Ship ‘RMS St Helena’, on a three week round trip from Cape Town. The resultant tourist trade has been very limited as stays of 4 days or 4 weeks at a time have been the only way of visiting the island. The island can be described as one of the last unspoilt and unique natural wonders of the world. SHCPLC recognise the potential for the creation of leisure time for high net worth individuals, that would enjoy the Island’s breath-taking scenery, world-class golf course, hiking trails, tranquillity and deep-sea fishing or diving.

In 2016, construction of an airport was completed, which is now up and running. This will change forever the dynamics on the island, in much the same way as the dynamics of Norfolk Island and Easter Island in the Pacific changed when airports were opened. However, unlike Easter Island and Norfolk Island, St Helena has had a stable population for many years. Additionally, the proximity to western culture in Southern Africa and the United Kingdom, as well as the time-zone convenience, make St Helena a very attractive holiday destination.

Whilst St Helena was a British Crown Colony from 1834 to 1981, it is now part of the British Overseas Territory of Saint Helena, Ascension and Tristan da Cunha. A scheduled air-service has been in operation since late 2017.

Saint Helena Corporation PLC was formed in 2015, with a view to create an investment platform for development projects on the Island of St Helena. Due to slow progress on getting projects off the ground on the Island, SHCPLC formed subsidiary companies in South Africa and the UK and acquired various properties and other related investments. It has also acquired three holiday lodges in the UK. The company now has assets of more than GBP3m, which have been shareholder funded.

Sir Nigel Thompson is a renowned engineer, who was knighted in 2002, for his work in helping to rebuild war-ravaged Kosovo. He was made a CBE (Commander of the Order of the British Empire) in 1996 for his services to the construction industry having previously been a main board director of ARUP and Deputy Chairman of Ove Arup & Partners who were the engineers responsible for building the Sydney Opera House.

Paul O’Sullivan, apart from being an engineer, is a Fellow of the Institute of Directors and a Certified Fraud Examiner. In the 1980’s Paul O’Sullivan carried out numerous property developments in London and the home-counties. Although a British citizen, between 1994 and 2001, he was a director of Johannesburg Tourism and the Tourism Business Council of South Africa. In 2000 he was recognised for his contribution in setting up the first formal tourism bus-trips into Soweto. He is also known for his charitable work, as founder of Forensics for Justice, a South African charity which has consistently exposed corruption and abuse of tax-payer funds in South Africa. In 2011 he was made a ‘Paul Harris Fellow’ by the Rotary Foundation for his work in the ‘furtherance and better understanding of the peoples of the world.’ He has been involved in property development for more than 35 years, in the UK, South Africa, Cote d’Ivoire, Australia, India and now St Helena Island.

Anthony Fitzhenry is a founding director and shareholder of SHCPLC. He is also the founder of Qhubeka, a South African and London based Charity. Anthony founded Qhubeka in 2005 with the goal of changing one million people’s lives in Africa, using bicycles. Anthony is also the founder of Axiz (Pty) Limited. From its founding in 1989, it grew to become the largest IT distribution company in Africa. In 2006, Anthony was named ICT Personality of the Year by the Computer Society of South Africa, and in 2009, the South African State Information Technology Agency named Anthony one of its fifteen ICT Legends, for his contribution to the development of ICT in South Africa. 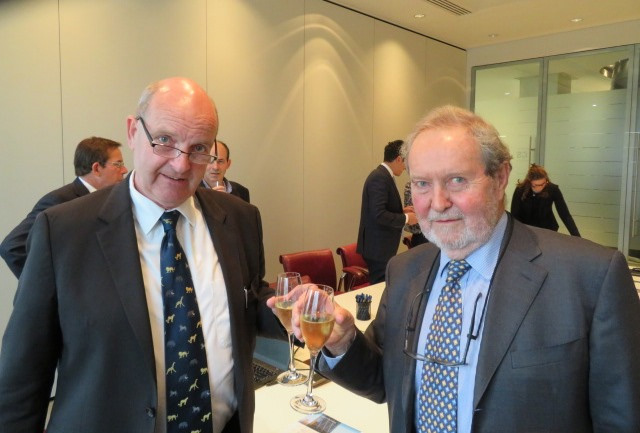 Paul O’Sullivan (left) and Sir Nigel Thompson toast the conclusion of the deal in London.